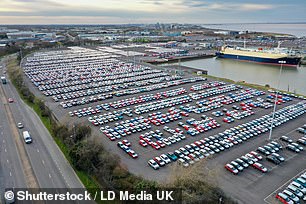 By City & Finance Reporter for the Daily Mail

Pendragon’s largest shareholder has joined a revolt against bosses’ pay. Hedin Group, which has a 27% stake in the car dealership, plans to vote against the pay report at the AGM next month.

The move follows a report by shareholder advisory firm Glass Lewis which recommended shareholders oppose executive awards, saying the sums were “inappropriate” given that Pendragon had sought large amounts of support from the government during the Covid-19 pandemic that it has yet to repay.

Hedin would also oppose the reappointment of Mike Wright, chairman of Pendragon’s compensation committee. At last year’s AGM, 42% of Pendragon shareholders voted against its pay policy – a rebellion also backed by Hedin.

Some links in this article may be affiliate links. If you click on it, we may earn a small commission. This helps us fund This Is Money and keep it free to use. We do not write articles to promote products. We do not allow any business relationship to affect our editorial independence.