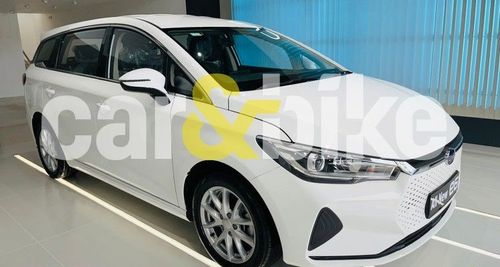 Chinese electric carmaker BYD has started selling the e6 electric minivan to private buyers. The BYD e6 was introduced last year with a price tag of Rs. 29.15 lakh (ex-showroom) but sales were limited to commercial and fleet users only. The automaker recently inaugurated dealerships for private sales and the new outlets confirmed this development at carandbike. At present, the company has introduced showrooms in Kochi and Vijaywada. An official announcement is expected later this month. Dealerships also have the vehicle in stock with deliveries promised during this month. The e6 prices remain unchanged for private buyers with the model available in two variants – GL and GLX.

The BYD e6 is powered by a 71.7 kWh LFP battery paired with a single electric motor that develops 94 hp and 180 Nm of peak torque. The MPV comes with regenerative braking as well as DC fast charging which charges the car from 30-80% in 35 minutes. A full charge is promised in 90 minutes for a range of 523 km (WLTP cycle) on a single charge. BYD will also install a 6.6 kW AC charger in the buyer’s home or office, which will fully charge the vehicle in approximately 12 hours. You can also opt for a more expensive 40kW AC wall fast charger that cuts the charging time down to two hours.

On the front, the BYD e6 features LED daytime running lights and taillights, six-way adjustable front seats with leather upholstery and a 10.1-inch rotary touchscreen infotainment system with connectivity Bluetooth and Wi-Fi. There is also a CN95 air filtration system. BYD offers a 3-year/125,000 km warranty on the e6, while the battery gets 8-year/500,000 km coverage. The automaker is expected to aggressively expand its presence with more dealerships for intended private buyers. The company also plans to bring the Atto 3 SUV to India, possibly to Auto Expo 2023 as a second product. The upcoming offering will rival the MG ZS EV and Hyundai Kona in the segment.