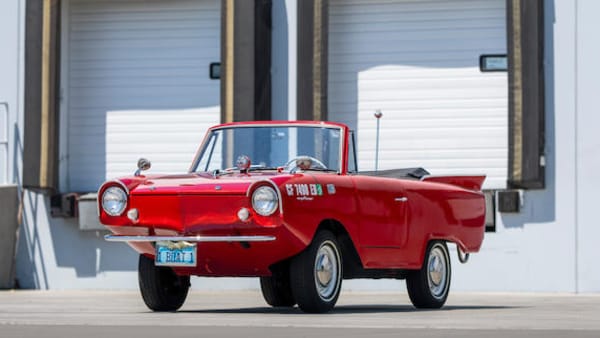 As the world goes gaga over future cars that can roll on roads and through clouds, there are cars from the past that are just as interesting. During World War II, Germany built several units of amphicars that performed tasks on both land and water. Some were also built after the war. One of them was auctioned in California, United States via Bonhams for August 13.

The legendary 1965 Amphicar Model 770 Cabriolet was designed by German designer Hans Trippel and can easily be used as a boat. It is powered by a rear-mounted 1,147cc Triumph four-cylinder engine that develops 47 hp of power. It benefits from a rear propulsion system powered by its four-speed gearbox for road use. On the water, it uses its two propellers to swim. However, the method of steering the amphicar on the road and on the water is the same and it turns using the angle of the wheels.

The amphicar model is finished in bright red exterior paint with a matching red and white vinyl interior. The vehicle would be an ideal purchase for someone looking to use a classic car or boat for their lake or beach house. However, the announcements website warns that the owner should perform a thorough leakage check before launching the amphicar in the water.