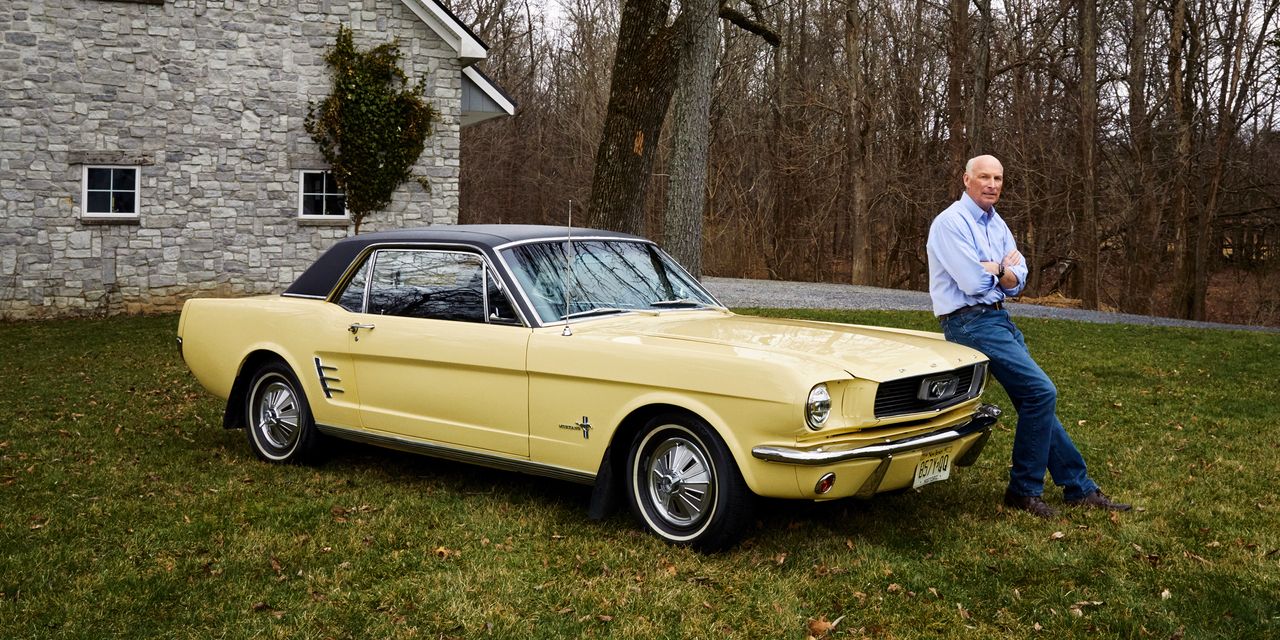 Greg Ackerson, 55, owner of Blue Ridge Lumber who lives in Blairstown, NJ, on his 1966 Ford Mustang, as AJ Baime said.

My dad, Donald Ackerson, was a Ford enthusiast, and he used to say that if Ford ever stopped making cars, it would work. At that time he owned a lumber store in our hometown and we were financially well off. He told us kids that when we got our driver’s licenses, he and my mom, Grace, would each buy us a used car, as long as it was a Ford.

When it was my turn, around 1982, I told my dad I wanted a Mustang, but more specifically an old one—not one of the 1970s Mustangs that were everywhere at that time. [Ford originally launched the Mustang for the public on April 17, 1964, at the New York World’s Fair.] When he drove home that yellow car, I was as excited as any 17 year old buying their first car. I also liked the fact that the car was born the same year as me: 1966.

I was the only kid driving a 1966 Mustang at North Warren Regional High School. I was immediately shocked by the attention this car received and the number of strangers who wanted to tell me about it. People were honking and waving, and it was a multigenerational thing – young and old. The first question many people asked was what engine did my car have, because there were options. Mine was a 200-cubic-inch six-cylinder engine, not the sexiest 289-cubic-inch V-8.

I grew up in New Jersey, but we lived so close to the Pennsylvania border that our local newspaper was the Easton Express. We got the local Pennsylvania news. Where I lived, you celebrated heavyweight champion Larry Holmes, because he was from Easton. But we also lived near Allentown, where Lee Iacocca was from.

Iacocca was considered the “Father of Mustang”. My parents often cut me newspaper articles about him, and I read all his books. He went to Lehigh University, and while I wouldn’t say I went to Lehigh because of him, he certainly inspired me. I ended up graduating from Lehigh.

Forty years after I got my driver’s license, I still have my Mustang, and it still has the Lehigh University parking sticker on the window. In the high school carpentry shop, I made a console for the car, and it’s still there, along with a place to put change that has 1980s tokens for the Delaware Water Gap Toll Bridge. After graduating from college, I met my wife, Karen, and some of her tapes from those early days are still in the car – Elton John, Janet Jackson and others.

I had the car repainted with a new coat of its original color, called Springtime Yellow. And I have since added a second 1966 Mustang that had belonged to my father, who first instilled in me and my siblings a love of cars and Ford in particular.