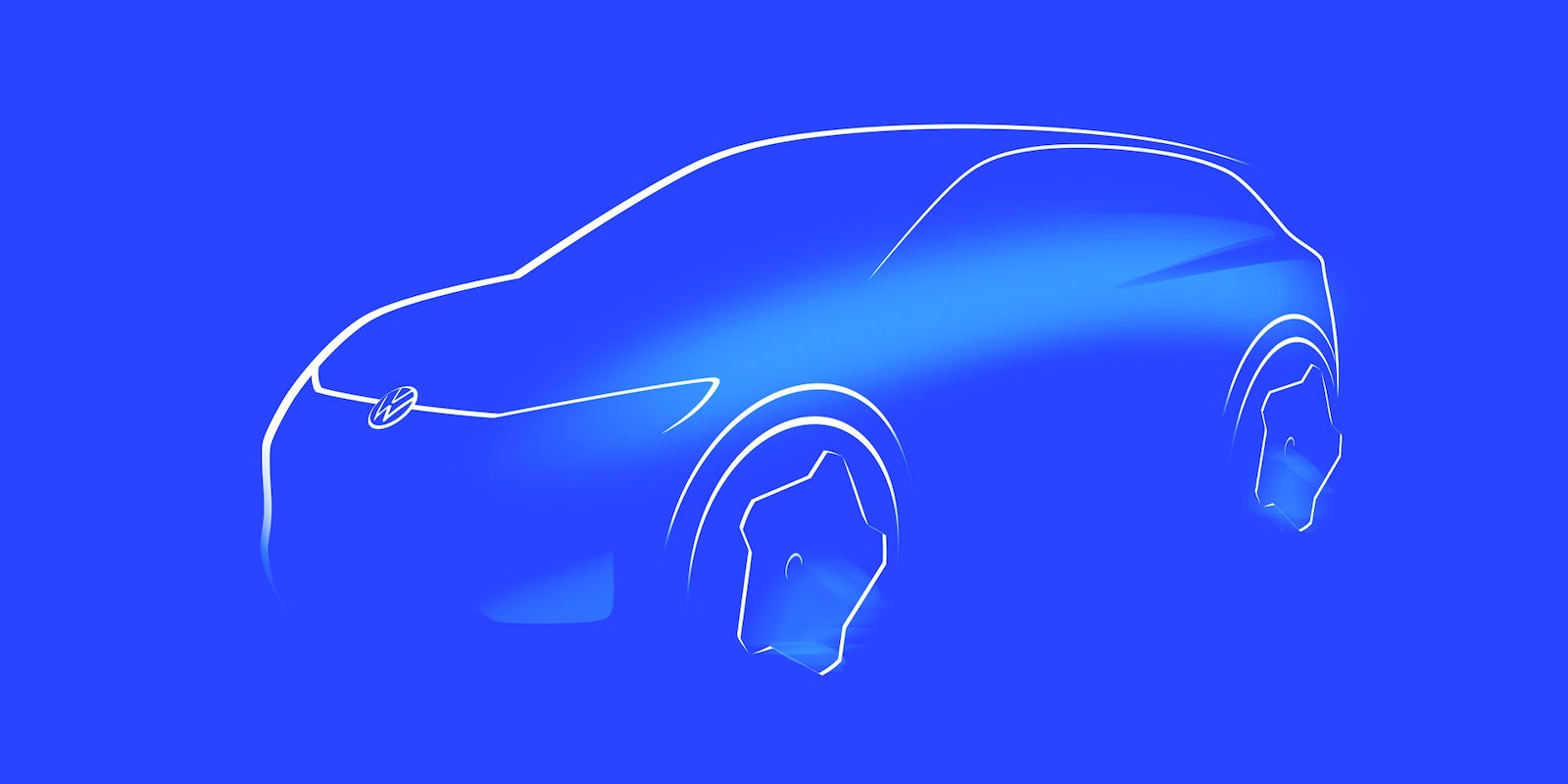 Volkswagen will build a new electric car in 2025, smaller than the ID3. It will share parts with two other new EVs from Skoda and Cupra and is expected to cost under £30,000. Read on for more details.

The Volkswagen Group (which also includes Skoda, SEAT and Audi, among others) has teased the design of a new compact electric VW. This new model could carry an ID1 badge when it goes on sale in 2025.

This new car will share many mechanical parts with new electric cars from Cupra and Skoda and is expected to replace the now off-sale Volkswagen e-Up as an alternative to the electric Fiat 500 and MINI Electric.

Volkswagen’s new teaser image doesn’t reveal much about the new car, but you can easily spot some similarities to the larger Golf-sized ID3 EV.

The central light bar running through the VW badge, for example, resembles that of VW’s current small electric car, although the car in this new sketch has sharper headlights and a more pronounced crease to the side above Rear wheel.

Interior of the new Volkswagen ID1

It’s unclear whether this new car will come with front and rear doors, but you can get a hint by looking at the teaser images Volkswagen also shared of two upcoming Skoda and Cupra electric cars (pictured below).

The Skoda (above) and new Cupra (below) appear to feature four-door body styles.

This follows Volkswagen’s recent trend of ditching sportier-looking three-door sedans in favor of more practical four-door models. You can no longer buy a new three-door Golf, for example.

The cabin of VW’s new small city car could borrow features from today’s ID3 and ID4 EVs or it could draw on the ID Life concept (pictured above) for some inspiration.

New engines and performance of the Volkswagen ID1

A future compact electric car from VW is not expected to borrow the electric motor from the ID Life (car pictured above). At 234 hp, it produced about 30 hp more than you get in a hot hatchback Ford Fiesta ST. It’s probably a little excessive in a small city car…

A future VW city car could do just fine with the ID3’s entry-level 145hp engine.

Chances are VW’s future electric city car could share the 58kWh battery you get in entry-level ID3 cars.

These come with around 217 miles of claimed range, but a future ID1 would be smaller and possibly lighter, helping it travel farther on a single charge.

It can comfortably go further than the 199 miles of range you get in an electric Fiat 500 with its top-of-the-line 42kWh battery.

Price and release date of the new Volkswagen ID1

Volkswagen did not confirm the name of this new car, but said it would start production alongside new electric cars from Skoda and Cupra in 2025.

Preview!🤩These are the first sketches of our smallest electronic models of #Skoda, #Cupra & #VWwhich will be integrated #Spain from 2025. These entry-level electric vehicles provide access #eMobility easier and push the future of the country’s mobility – for generations to come. pic.twitter.com/LX49mJPYB5

Being an entry point into VW’s electric car range (which currently includes the ID3, ID4 and ID5, with more on the way), means the new car will be the cheapest of the bunch. Expect to pay less than £30,000 when this car goes on sale in a few years.

Can’t wait until then? Check out the latest electric car deals available through carwow? Looking to upgrade your current car? See how easy it is to sell your car with carwow and discover the latest new car deals.