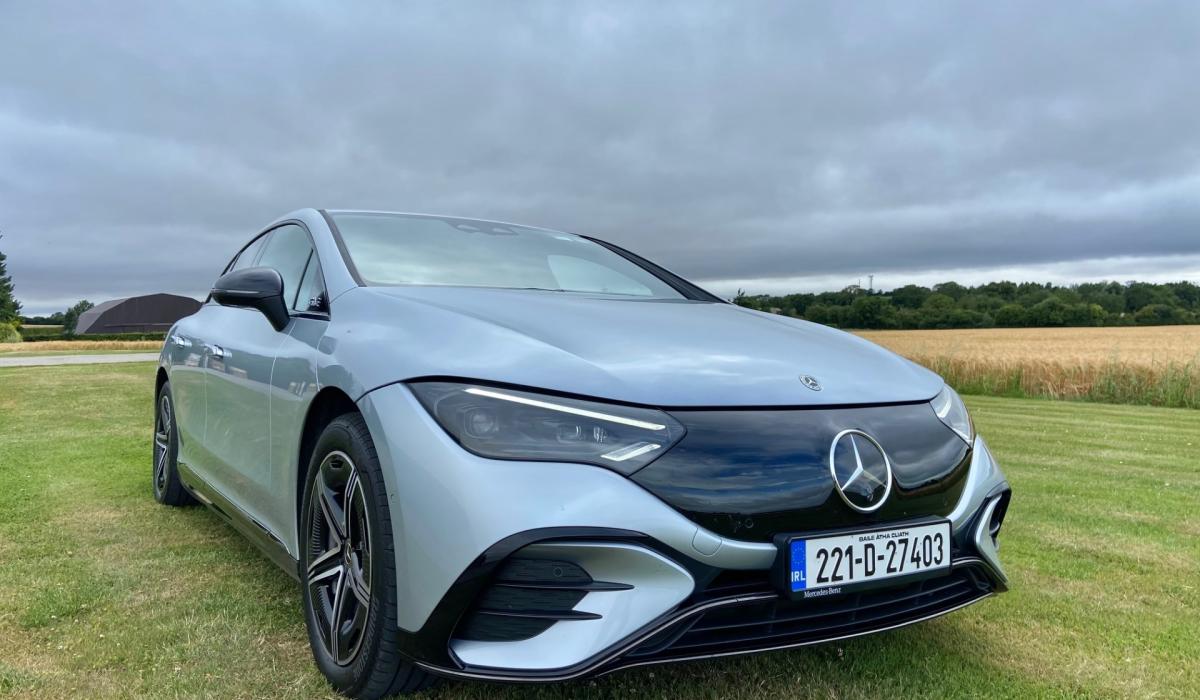 Mercedes is launching a full range of electric vehicles that covers everything from small sedans to large SUVs. We already have their EQA, EQB, EQC and the top of the line EQS. Now that the new EQE has arrived, think of it as an E-Class sedan but purely electric.
The new EQE range starts at €85,980 and that price increases rapidly as you tick off the options list.
Two versions are available from launch, an EQE 350+ and an AME EQE 43 with a more powerful battery and motor.
My test car this week is the EQE 350+ AMG range.

Judging from my somewhat unscientific survey of those interested in the car during my tenure, opinion is somewhat divided on the looks. Sure, it looked very sleek, but many felt it lacked that “Mercedes” flair. I think the huge shiny plastic masked in the front doesn’t help her in the beauty contest. Nevertheless, others thought it looked good. I am not so sure. I would much prefer the styling of the current E-Class, for example.

How is it inside?

Many elements of the cabin will be familiar to anyone who’s been inside one of the latest Mercedes cars and that’s a good thing. It looks very good indeed and of course, despite the rather hard and cheap plastic used on the door pockets, the quality of everything else is spot on.

Ahead of the driver is a nice configurable digital instrument display with options including round analog-style digital instruments (one of the best on the market) and a huge 13-inch center touchscreen which I have to say is very intuitive to use and offers great features and graphics.

The new EQE features the latest innovations in automotive safety and luxury. The list is too long to include here, but highlights include the latest Mercedes version of MBUX, a full genuine leather interior (not ARTICO) as well as sophisticated collision avoidance and driver assistance systems.

Overall, the cabin is a pleasant place with beautifully styled sports seats with an ambient lighting strip that runs around their outer edge as well as over the door tops and dash. It’s really impressive and I love the illuminated turbine-style air vents. Just superb! As for space, its four seats are quite comfortable and five on the pressure. The boot is also a good size.

What’s under the hood?

I do not know ! It does not open. But humor aside, the EQE is powered by a 90kWh battery driving a 215kW electric motor that develops some 292bhp. Power is sent to the rear wheels via a single-speed automatic gearbox.

The EQE has the usual instantaneous torque we’ve come to expect from EVs and performance seems much quicker than its paper 6.4-second 0-60 mph time might suggest. Road tax is €120 for the year and although Mercedes claims a range of around 640km from 100% charge, in reality I managed to get closer to 525km which is d elsewhere excellent.

How is it to drive?

The huge weight of EVs really tends to dampen handling (compared to, say, an equivalent E-Class) and often compromise rideability. The EQE is no different, but I have to say it’s one of the best EVs to drive.

It’s responsive, handles well, and manages to conceal its massive bulk most of the time. On some rougher roads the suspension can hit the bump stops, but that was a rare occasion during my test. It’s super quiet and refined too. So overall I really enjoyed driving it!

Quite simply, the new Mercedes EQE 350+ is in my opinion the best EV currently available bar none!