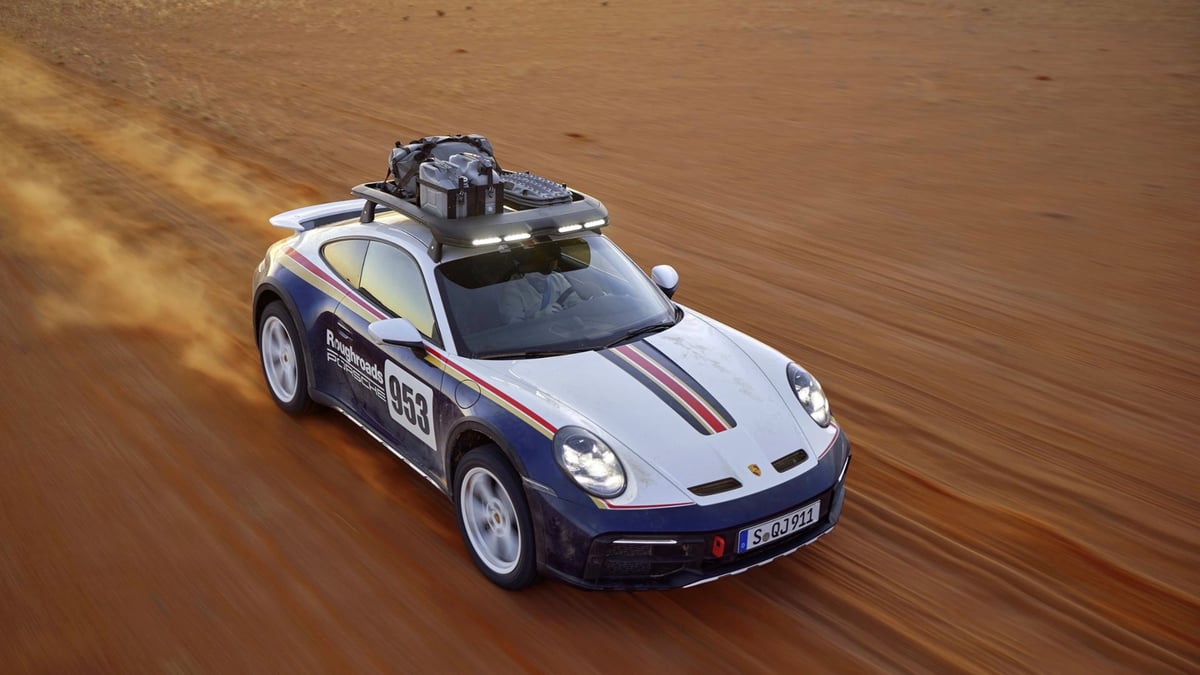 The Porsche The 911 Dakar was unveiled as a limited-edition off-road version of the iconic sports car.

Inspired by the brand’s first victory in the 1984 Paris-Dakar rally, the 911 Dakar features body, chassis and drive mode changes to give it a tougher look and more robust capabilities than the standard 911 range. Only 2,500 copies will be sold worldwide, each priced at £173,000.

The clearest change is the increased ride height of the 911 Dakar, with the rally-inspired model sitting 50mm higher than a standard Carrera S. This can be increased by an additional 30mm to give extra ground clearance which Porsche says can rival more conventional off-roaders. Vehicles. Porsche also says the elevated ride isn’t just for crawling over obstacles, but can be used at speeds of up to 105 mph for “ambitious off-road adventures.” Above this speed, the suspension returns to its standard height.

To help the 911 Dakar progress quickly away from the tarmac, specially developed Pirelli Scorpion All Terrain Plus tires with a thick tread to provide better traction and reinforced sidewalls to make the tires more resistant to cuts and abrasions. These wrap around 19-inch front and 20-inch rear alloys. Porsche says the tires offer engaging handling, but buyers can spec more road-focused Pirelli P Zeros.

The 911 Dakar is powered by the same 473 hp 3.0-liter twin-turbocharged flat-six engine used in the 911 GTS. This allows the Dakar to sprint from 0-60mph in 3.3 seconds and beyond to a limited top speed of 149mph due to the all-terrain tires.

Power is sent to all four wheels via an eight-speed automatic transmission, while all cars also benefit from rear-axle steering and Porsche’s Dynamic Chassis Control system. Two new riding modes have been created to improve the off-road skills of the Dakar. Rallye is designed for “loose, uneven surfaces” and puts the car in a more rear-focused all-wheel-drive setup. Offroad is designed to work with the high ride height in tougher conditions.

Visually, the car gets a wider body than regular 911 models and there’s additional protection in the form of stainless steel plates at the front, rear and on the sills. The side air intakes have also been redesigned to protect them from flying debris. Front and rear tow lugs add to the tough, ready vibe and owners can spec a rally raid-inspired roof rack with a light bar and space for fuel and water canisters. To complete the 1980s homage, the owner can also choose a Rallye Design Pack which recreates the famous two-tone Rothmans livery of the original rally cars, but with the script changed to a more socially acceptable “Roughroads”.

Why are there so many advertisements for car insurance?