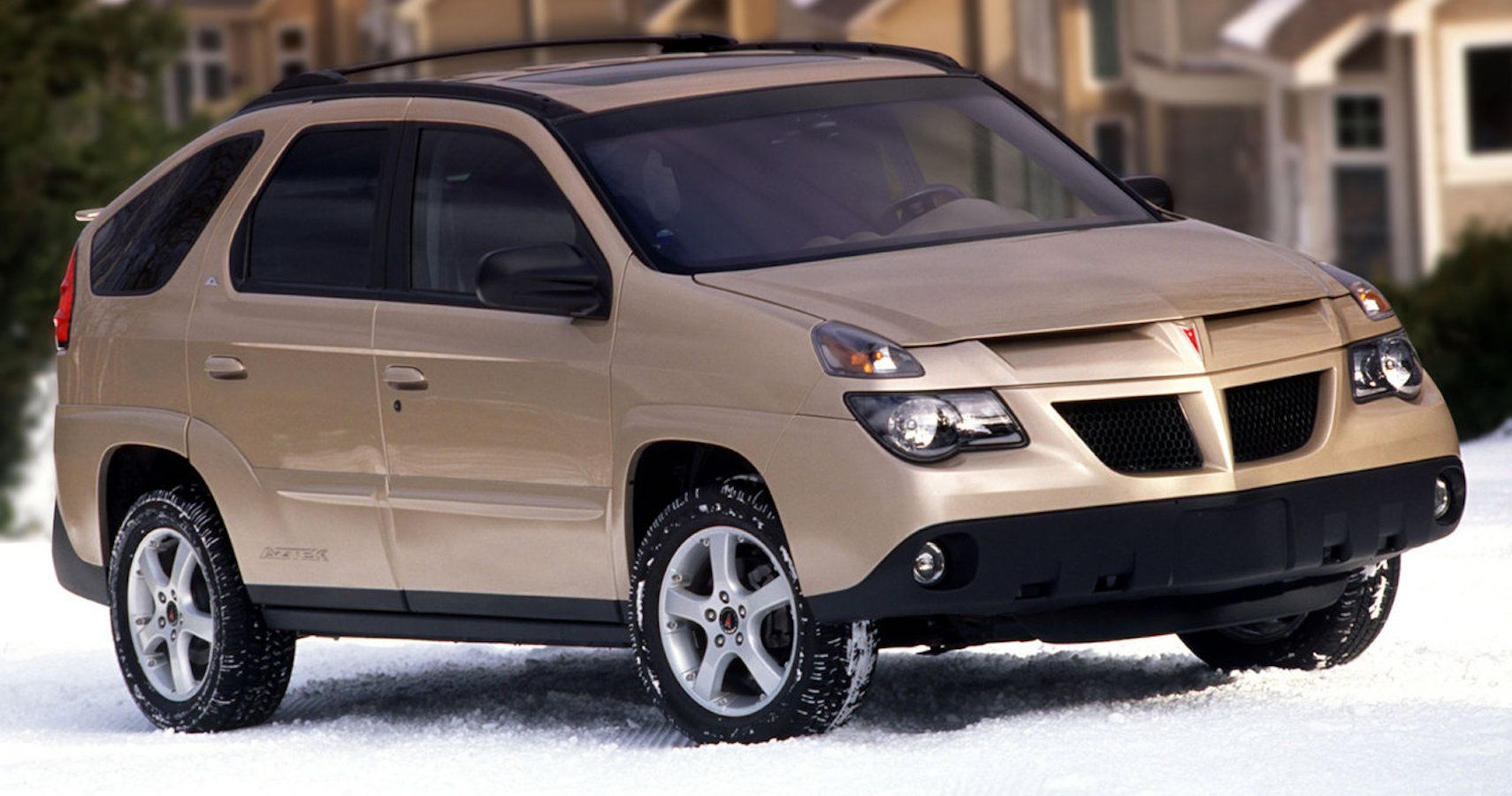 These 10 car models should never have left the drawing board

Over the past 130 or so years, the automobile has changed life as we know it on this blue and green ball floating in space. We have gone from being dependent on horses for thousands of years to being able to move not only ourselves but also our belongings from place to place in record time. The automobile is one of the greatest technological achievements in human history – until someone designed the SsangYong Rodius.

Some cars are spectacularly designed and built – the Pagani Huayra and De Tomaso P72 come to mind – and they invoke a sense of occasion and happiness in the psyche of car enthusiasts. Then there are cars that do the exact opposite – cars like the Pontiac Aztek, Chrysler PT Cruiser and Fiat Multipla. How these vehicles managed to be approved by several professionals is beyond belief, but they were and now we have to manage them.

These automotive abominations are some of the ugliest and least appealing ways to get from place to place, and yet people bought them. Regardless of performance or practicality, these ten used car models are some of the worst mass-produced models ever, and they should never have left the drawing board.

The Chevrolet SSR was in production between 2003 and 2006. It was designed to look like a modern version of the 1951 Chevrolet Advance Design pickup, blending old and new to create a sporty 2-door pickup. The result was a kind of retro-inspired vehicle that was too rounded and too cheap.

Engines included a 5.3 liter V8 which was later upgraded to a 6.0 liter – both mated to a 6-speed manual or 4-speed automatic transmission. Probably the weirdest thing about the SSR was the fact that it had a folding hardtop, turning it from a weird pickup into a weird roofless pickup.

The Fiat Multipla has been repeatedly named the “ugliest car in the world” since its launch. Although the practicality of the Multipla cannot be ignored, it is the design that captures most of the attention so quickly. Interestingly, the interior and exterior designs of the Multipla were shown at the Museum of Modern Art in New York before its launch.

Most of the Multipla’s design is fine – typical Fiat in fact – but the part that makes it one of the ugliest cars in the world is the lip just before the windscreen. Fiat got rid of it when the model was facelifted, but the damage was already done.

Related: Here’s Why The Fiat Multipla Never Came To America

The Plymouth Prowler isn’t just an ugly car, but it was underwhelming when it launched in 1997. The concept car showed promise, mixing old-school hot-rod styling with more modern technology. Unfortunately, the production version was anything but cool.

Instead of a big V8 like the concept car, the production version was only ever sold with a 3.5-liter V6 mated to a lazy, silly 4-speed automatic. These transmission options really put a damper on the modern hot-rod effect that Chrysler was looking for. Luckily, the engine bay is just big enough for a V8, which many owners did.

Another car designed with classic styling mixed with more modern technology, the Chrysler PT Cruiser was a perfect example of what not to do. How the design was endorsed by several auto industry professionals and executives is beyond us, but it was.

Surprisingly, Chrysler produced 1.35 million PT Cruisers during the ten-year production period and the 1930s-inspired vehicle got a convertible version as well as a sporty model based on the Dodge Neon SRT-4. The PT Cruiser is definitely a design that should have been left on the drawing board – possibly with some major tweaks.

The Nissan Cube was an interesting car because there was nothing wrong with the first generation model. The problem started with the second generation which was a reinvention of the model and car design in general.

The main issue with the Cube was that it was unbalanced, with a C-pillar only on one side of the rear, creating a continuous glass look around the corner. The model was also almost a perfect cube, making it look more like a modern art exhibit than a family sedan. The third and final generation was little more than a facelift but retained the general design.

The Pontiac Aztek was sold between 2001 and 2005, with GM anticipating an annual sales quota of around 75,000. It sold just over 29,000 in its first year of production – the best year for sales. The main problem with the Aztek was not because of its overly stylish exterior, but because it was more expensive than its rivals and offered nothing better.

The Aztek was specifically designed for “Generation X”, hence the “ultra-futuristic style”. Interestingly, the man who designed the Aztek went on to lead the team behind the Chevrolet Corvette C7 – a car that really looks great. Oddly enough, Pontiac’s own slogan for the Aztek was “Quite possibly the most versatile vehicle on the planet”. Yes of course.

Oh my, the SsangYong Rodius. Sold between 2004 and 2013, the first generation was designed to look like a luxury yacht for the road. As probably expected, it didn’t work out very well. What worked well though were the Mercedes-Benz underpinnings, including the engines and automatic transmission.

The styling of the Rodius was not well received. Many simply called it “ugly”, while others went further in their disgust. The car was quickly dubbed “Odious Rodius” by motoring journalists who also described the vehicle as resembling a “surprised hippopotamus” and ugly enough to scare small children. And these are kinder reviews.

The REVA G-Wiz is perhaps one of the most hated vehicles in automotive circles. It was on sale between 2001 and 2019 and was not updated at all during that time. It was slow, dangerous, underpowered, ugly and inconvenient. The only good thing about it was that due to the electric drivetrain, the G-Wiz was exempt from taxes and congestion charges in most countries where it was sold.

The vehicle was fitted with 6 to 8 lead acid batteries located under the seats, powering a 17 hp electric motor. The G-Wiz was capable of reaching an amazing speed of 50 mph when the boost function was activated, draining the batteries in record time. It normally only had about 50 miles of range before needing eight hours to fully recharge.

The Nissan Juke is one of the most hated cars of the past 12 years. Mechanically it’s a great car with good engines and fuel economy, but the styling is what puts most people off – Richard Hammond most famously. Looks like Nissan gave their Micra city car Botox and it had an allergic reaction.

The front is the most aggressive with its domed headlights on top of the hood and the huge round driving lights just below the hood. It looks like a bug splattered on a windshield. Nissan significantly improved the styling of the Juke with the second generation, but then gave it underpowered engines.

Related: The real reason why not everyone loves the Nissan Juke

The Nissan Murano SUV wasn’t the best-looking in its segment, but it was good-looking enough not to deserve much criticism. This changed with the introduction of the second generation and the inclusion of the CrossCabriolet. Marketed as “the world’s first all-wheel-drive crossover convertible”, the CrossCabriolet had only two doors and, because of the power-folding roof, lost much of the revised trunk space.

The CrossCabriolet was only available as a top-of-the-line LE trim, i.e. a naturally aspirated 3.5-litre V6 powered to all four wheels via Nissan’s iAWD system – which was biased to the front wheel – via a CVT gearbox. Not only did the Murano CrossCabriolet look terrible, it drove even worse, thanks to the added weight of the roof mechanism and terrible gearbox choice.