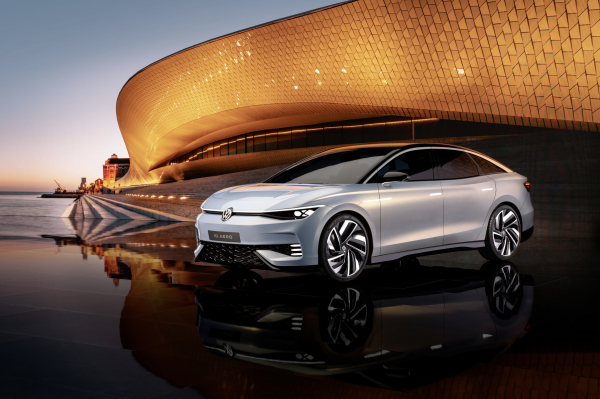 With ID. Show car AERO, we reveal to you in preview the next member of the ID. family. A car with an emotional and at the same time extremely aerodynamic design, a range of over 600 kilometers, extraordinary space and a premium interior. With our ACCELERATE strategy, we are intensively pursuing the electrification of our model range. After the ID.4, this model will be our next global car for Europe, China and the United States.

The concept vehicle is almost five meters long and was designed based on aerodynamic principles. The roof slopes back like a coupé and contributes to an excellent coefficient of drag of 0.23. Volkswagen’s Modular Electric Drive Matrix (MEB) additionally enables short overhangs, a long wheelbase and an exceptionally spacious vehicle interior.

The identity. The Li-ion AERO battery has a net energy content of 77 kWh. Due to the interaction of the efficient drive system and the excellent aerodynamic properties, the ID. AERO reaches distances of up to 620 kilometers (WLTP) (385 miles).

With the ID close to the production. AERO concept car, Volkswagen is stepping up its electric offensive in China as part of its ACCELERATE strategy. After ID.3, ID.4 and ID.6, the production version of ID. AERO will be the fourth all-electric model series in China, with availability expected in the second half of 2023. Two versions are planned there, one for each Volkswagen joint venture.

Based on its regional strategy, Volkswagen aims to become the leading supplier of sustainable vehicles in China. By 2030, it is expected that at least one in two vehicles sold in China will be an electric vehicle.

Like the new flagship model of the ID. family, identity card. AERO will be offered worldwide in the future, also in Europe and North America in addition to China.

The identity. AERO demonstrates the flexibility of Volkswagen’s purely electric MEB architecture, which can be adapted to vehicles of different shapes and sizes. The MEB can be used in all segments, from the compact crossover to the spacious SUV and minibus to the sedan. With ID. AERO, the MEB therefore allows the ID. family to enter the mid-size sedan segment. The MEB also fully exploits the possibilities of electric mobility, enabling long ranges, maximum digital connectivity and over-the-air update capability.

Volkswagen expects the production version of the ID. AERO for Europe will roll off the assembly line at the Emden plant in 2023. With the volume production of electric vehicles, Emden will be one of the first such Volkswagen plants in Lower Saxony.